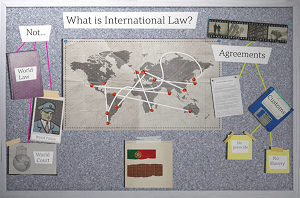 Thousands of people in parts of Africa and Asia are to benefit from a digital online series that not only helps them learn English but also explains how international law can empower them to improve their lives.

These feature subjects including the environment, rights to water and space, plus David-and-Goliath tales of individuals taking on multinational businesses.

Space in the spotlight  for the first five episodes

Far from being the final frontier in the series, space is the first subject to be tackled, fittingly in Space Week.

As the world sees the devastation caused by climate change, fresh water becomes more limited, corporations become bigger than countries and the ongoing race to Mars, the series puts the spotlight on international law and its role – or lack of it.

The five short space episodes cover questions such as whether you can commit a crime in the stratosphere; what happens if space junk falls to the ground and causes damage; and the onus on big multinationals to legally prove how they will protect the environment, if they want a licence to travel into space.

More relevant to day-to-day living are the episodes that cover water and access to it. According to the United Nations, two billion people do not have safe water, which it aims to change by 2030.

The UN says half the people who drink water from unsafe sources live in Africa. In sub-Saharan Africa, only 24 per cent of people have access to safe drinking water.

These animated guides help international audiences understand the background, history, and key elements of international law, how the United Nations and human rights are involved, and what might happen if these laws are breached.

Senior Lecturers in Law at the OU, Carol Howells and colleague, Edwin Parks, worked with BBC Learning English producers to help them choose the content.

We wanted to find areas that were of relevance and of use to the students who were learning English. We hope we have highlighted some of the new solutions being found in a traditional legal framework and presented a measured viewpoint that widens knowledge and hopefully goes some way towards making people feel empowered and able to make a difference.

While the main reason for the video is to help people speak English, it also shows the relationship between international law and the laws of individual states.

Visit our NEW Broadcast & Partnerships site where you can find extensive resources and information on topics related to this series.