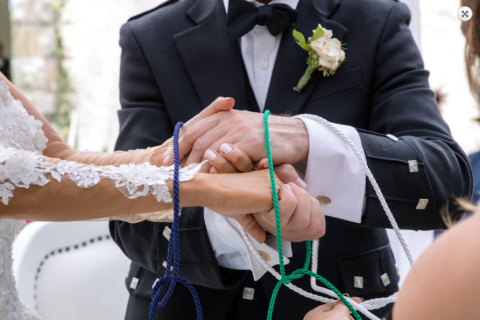 An Open University academic’s research has helped pave the way for the possibility of ‘alternative-style’ weddings becoming legally binding in England and Wales.

If you attended a really personalised wedding-style ceremony this year, it was probably conducted by a ‘wedding celebrant’.

Yet it won’t have any legal effect on the couple’s status because to achieve that they would have to organise a register office wedding, too.

But the need for two ceremonies may become unnecessary, because research conducted at the OU by Stephanie Pywell, Professor of Law and Social Justice, has contributed to the recommendations of a key report that could enable independent wedding celebrants to conduct legally binding weddings in the future.

“The law governing weddings has been created piecemeal since 1753, and has been unfit for purpose for many years.

“This clear and comprehensive report provides a really good framework for the Government to create a comprehensive set of laws fit for today’s multi-cultural society.”

One of the most fundamental of the report’s recommendations is that the law should regulate who can officiate at weddings, rather than where weddings take place.

The report suggests that, if the Government so wished, independent celebrants could become responsible for the legal requirements of the ceremony, including making sure that the marriage was registered.

The Commission was prevented from recommending whether independent celebrants should be able to apply to become authorised officiants, but it’s set out a framework that would enable them to do so if the Government agreed.

The report includes suggestions as to the training and authorisation of independent officiants, which Stephanie recommended after a 2020 exploration of the work of independent celebrants, a project supported by the Wedding Celebrancy Commission.

Other aspects of the report include:

This means that people who were brought up to be religious, but no longer practise their faith, can have ceremonies including aspects that are meaningful to their parents, or honour their culture or heritage.

It’s a significant move away from the current law, which prohibits any material that is ‘religious in nature’ from being included in a civil wedding ceremony.

The potential change reflects a need identified by Stephanie and Professor Rebecca Probert from the University of Exeter – the specialist adviser to the Law Commission for this project.

In 2018, Stephanie and Rebecca found inconsistencies between registrars about what ‘religious in nature’ meant. This led to disappointment and uncertainty for couples.

Stephanie and Rebecca recommended greater flexibility in the law, so that couples could marry in ways that were meaningful for them.

Stephanie and Rebecca have also investigated the impact of the first COVID lockdown on couples’ plans to marry in England and Wales.